Start with a couple of Speight’s after work, add plenty of insight, more than a dash of hard graft, then recap over a cup of coffee … and, lo and behold, a software program that is making waves here and abroad.

Paul Hansen and Franz Ombler first met in 1996 over a beer and a catch-up for staff working in the Treasury building in Wellington. At the time, Hansen, who had trained as a health economist, was working as a Treasury analyst and Ombler worked in Treasury’s IT department.

Hansen later moved back to the University of Otago, where he is now an associate professor of economics, while Ombler went on to become the Treasury’s Chief Information Officer.

While on sabbatical at the Stockholm School of Economics in 2001, Hansen had what he describes as a “Eureka” moment. With his background in health economics, he had long been pondering the old perennial of how best to prioritize patients for health treatment.

It proved to be the first step on the journey to a “point-and-click” software program able to rank individuals based on a combination of selected criteria and decision-makers’ answers to a few specific but simple questions.

Recognizing he had some of the fundamental theoretical answers he was looking for, Hansen quickly realized he needed someone who knew his way around computers.

So six years after sharing a beer, he met with Ombler again, this time over a coffee; Ombler liked what he saw and accepted the challenge on the spot.

After generating pages and pages of numbers and equations, Ombler was soon able to represent, in algorithmic form, the patterns Hansen had earlier described to him. In short, this meant they could get a computer to ask doctors the questions that Hansen had proved could be used to prioritize a surgical waiting list. The program, which eventually became known as 1000minds, codifies doctors’ answers, in the process capturing their expert judgements.

They also realized they had invented something that had wider potential applications; it was simple, accurate and able to help decision-makers across numerous disciplines worldwide.

Because 1000minds asks the simplest of questions, it give decision-makers greater confidence in their answers and therefore the accuracy of the rankings produced.

The approach was mooted by an American academic in the 1970s but was rejected as having intractable difficulties. However, Hansen and Ombler solved those before publishing and patenting their creation. 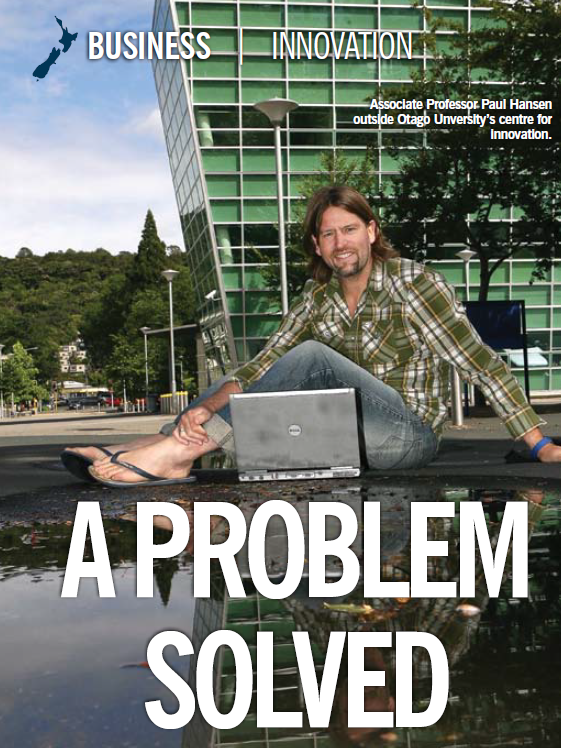 Following its success in the New Zealand health system and, later, Canada’s, 1000minds now holds patents in New Zealand, the United States and Australia with others pending. Along the way, it has collected a swag of national and international innovation awards.

“We first called ourselves Point Wizard and had an awesome logo styled around frangipanis, like a seventies surfboard brand,” Ombler says. “We joined the Upstart business incubator in Dunedin in 2005 and they felt it wasn’t the right image for us so they commissioned a branding consultant to help us out.”

The consultant came up with the name 1000minds and Alex Gilks of Chopchop Design created the new logo.

Hansen and Ombler funded the development of 1000minds out of their own pockets. The start-up costs mainly involved their time as initially they were not seriously pursuing it as a business opportunity. To them it was more about solving an interesting intellectual and computational problem. Once solved, they realized it had broad business potential. Not just for prioritization, but also for decision-making in general, for analyzing ‘value for money’, for capturing expert judgements and understanding consumer preferences.

Ombler traded in his Treasury role for an office at his Wellington home and now works full time on 1000minds. Living in different islands has proved no obstacle to the pair. Ombler’s parents live in Dunedin so they catch up when he pays them a visit, and Hansen manages to get to Wellington occasionally.

“We can also share a screen over the Internet and while we can’t clink glasses we can share a beer or at least a beer recommendation,” Ombler says.

Grant Shackell: Seeking the views of sheep farmers on the importance ewe efficiency already plays and needs to play in the future sustainability of their business. 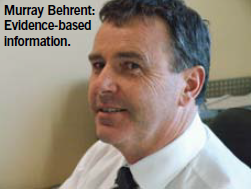 Already used in several agriculture research projects, two in New Zealand and four overseas, with more in the pipeline – 1000minds’ ability to ask the simplest of questions to collect and evaluate the opinions and thinking of farmers.

Such a capability offers a powerful means to effect direct change, identify opportunities to increase productivity and engage the industry in new and exciting ways.

Initially developed as a response to better managing surgical waiting lists (* see breakout), 1000minds is clever; it codifies peoples’ preferences by asking them to choose between real or imaginary alternatives.

A simple illustration is choosing a new home, an example most of us can relate to: Would you prefer a well-insulated house with poor sun, or a poorly-insulated house with good sun? Your answer reveals the relative importance to you of insulation versus sun, and likewise for other criteria that might be included.

Of increasing relevance is the ability to convert preference information into economic terms so that stakeholders’ choices can be presented to clients in dollar terms. 1000minds is helping researchers do this.

“Being able to put a dollar value on people’s tastes and choices is hugely powerful to our clients. It allows them to make better informed decisions,” Dunedin-based AbacusBio’s Tim Byrne says.

AbacusBio first used 1000minds to establish how Australian plant experts rated the relative importance of yield, quality and disease resistance as selection criteria for perennial grasses and legumes in Australia.

When research is undertaken, or research outcomes are being implemented, stakeholder opinions and differences in opinions are of increasing importance.

“What Paul and Franz have created here is a fantastic tool for industry – to engage with farmers, generate industry-driven mandates and provide insights that industry needs,” Byrne says.

Last year Hansen and Ombler’s creation was used for the first time in the New Zealand sheep industry.

With funding from Ovita (a partnership between Beef + Lamb New Zealand and AgResearch), AgResearch Invermay’s Grant Shackell teamed up with Byrne to seek the views of sheep farmers on the importance ewe efficiency already plays and needs to play in the future sustainability of their business.

From the farmers’ responses, Shackell and Byrne will get meaningful information the industry can use to chart the path genetic improvement should take to improve ewe efficiency.

Although using 1000minds in this study is a New Zealand sheep industry first, it has been used in other industry sectors.

“Being able to put a dollar value on people’s tastes and choices is hugely powerful to our clients.”

As well as several projects in New Zealand, AbacusBio has also put 1000minds to work for Irish dairy farmers. Their industry genetic-improvements body, the Irish Cattle Breeding Federation (ICBF), wanted to understand which traits impacted most in Irish dairy farms. Now it has a better understanding of that issue, ICBF is able to direct economic research and update the genetic tools it is using in its dairy cow breeding programmes.

Byrne has been using 1000minds for several years, including while spending time in Ireland completing his PhD. Sheep Ireland asked him to find out what, if any, differences there were in the opinions of lowland and hill farmers about what contributed to profitable sheep.

Recognizing the value of involving their farmers in the research and development process, the Irish were also keen for Byrne to gauge whether farmer opinion aligned with the findings of a wide-ranging economic analysis of their industry at the time.

Pasture Australia and Meat and Livestock Australia engaged AbacusBio to establish the value Australian plant experts and farmers placed on plant attributes including yield, persistence, feed quality and disease resistance in improving the productive performance of perennial grasses and legumes across three Australian states. The outcome of this study is now driving plant research and breeding priorities. 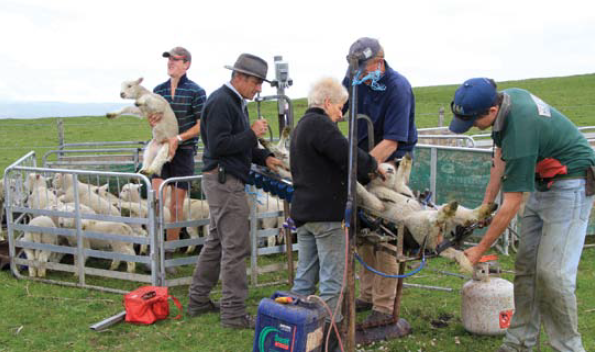 Keen to ramp-up the performance of the country’s merino sheep flock, Sheep Genetics Australia teamed up with AbacusBio to establish what differences there are in the opinions of Australian merino breeders around what are the most economically valuable production and maternal traits, now and into the future.

Still the backbone of the Australian sheep industry, merinos are spread across a wide range of diverse climatic zones, producing different wool types in different production systems, from extensive rangeland to irrigated flats.

AbacusBio and 1000minds have been commissioned by Angus Australia to find whether the priorities its breeders are placing on traits align with what the current economic selection tools suggest.

Closer to home, with funding from the Ministry of Primary Industries’ Sustainable Farming Fund, UK supermarket chain Sainsbury’s and Beef and Lamb New Zealand, AbacusBio and Alliance Group intend using 1000minds to establish what farmers think about the implications of docking lambs to different tail lengths, or not docking at all.

It is part of a three-year trial to provide suppliers with objective information so they could make informed decisions on the most appropriate tailing strategy.

Alliance Group’s livestock manager Murray Behrent says the study will provide its international retailers with evidence-based information that can be used to assure their customers’ that best-practice concerning tail docking is being followed. Initial results of these trials are expected in April and the final results will be known in March 2014. 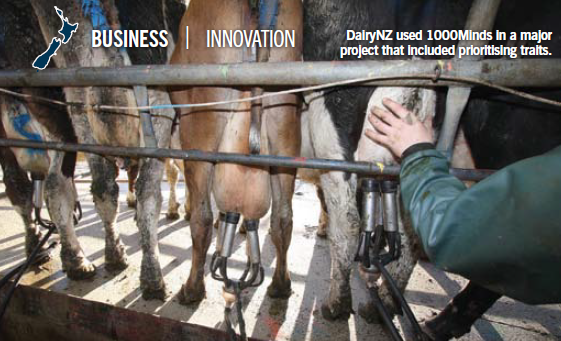 DairyNZ used 1000minds in a major project that included prioritizing the traits that make up the National Breeding Objective and assessing the importance of some new traits, ultimately gaining a farmer-driven mandate last year to re-evaluate the economic values around production and fertility traits being used in the industry’s genetic selection tools. The revised objectives are expected to be rolled out during the next few months.

Make the best decision, every time

1000minds is proud to help organizations and individuals around the world improve their decision-making processes and discover customer preferences. The ‘secret spice’ behind our innovative approach is our award-winning, patented PAPRIKA method, which makes the process simple, smart and fun!

Curious about how 1000minds can help you? Sign up for our free trial or book a demo with our friendly team today.

The power of 1000minds is that farmers can use it to reveal otherwise hidden factors that have a significant impact on profit and they can then focus selection more on these traits.

A new tool to rate gardens on their level of biodiversity could have key implications for building more ecologically sustainable cities in an increasingly urbanized world.

Research what people care about with 1000minds.

Get up and running quickly with a free onboarding call.

“In removing complexity and uncertainty from decision-making processes, 1000minds has blended an innovative algorithm with a simple user interface to produce a tool of great power and sheer elegance.”